I know it is all about faith.  If you believe in God, then you will see Him else there is nothing like God anywhere.

Yesterday, something happened that makes it stronger for me to believe that GOD IS HERE SOMEWHERE.

The day before yesterday night, I was playing with my 1 year old daughter and I lifted her with her left hand.  I don’t know what happened she suddenly started crying.  She was not able to lift her left hand at all.  She was not even able to lift anything with her hand.  So I figured that she has got some slight dislocation.  She didn’t get any swelling so I was sure that there is no fracture.  But she was crying like anything.  Somehow we passed the night.
In the morning we called the doctor for appointment but she said there is nothing she could actually do except that she will tell us some exercise so that over a period of one or two days it improves.
When no one can help, only God helps.  So we went to the temple and wished God that by night our daughter be OK.  Miracle happens.  As soon as we came back from temple, my daughter started moving her hand and started playing.  There was no pain at all.  She started playing as earlier.

We were very happy to see that, thank God.  It is only God who can do miracles.
I firmly believe, "God IS here somewhere." 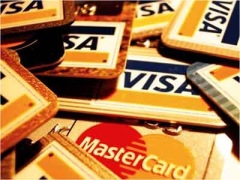 Supposedly the safest way (according to banks) is to sign on the back of your card as soon as you receive it. So that when you shop, your signature be matched to ensure you are the one who has authority to use that card.

But in my personal opinion, it is very risky to sign on the back of your credit/debit card. Because by signing on the back you are providing a copy of your signature so that any ill-willed can try to make a copy of that signature and pretend to be you. At the same time if you don’t sign, then also you are at risk. As then you are opening more door to fraud.

Instead what I generally do on my credit cards, I write ‘See picture I.D.’ to make sure that the merchant always sees my drivers license or state ID before approving the purchase. So I am saved….Of course the transaction sometimes takes long time but it is always safer in my opinion to do so. At least I am not paying any hefty bills on my account.

What do you do on the cards? Do you sign? 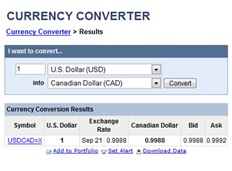 Today 1 USD is equal to almost 1 Canadian Dollar (CAD).  Check yourself at Yahoo Finance.  What is happening.  USD is going down day by day…

In the last 5 years USD is continuously dropping from 1.6 CAD to today approximately 1CAD.  Obviously it means that Canada economy is performing better as compared to United States.  What did you do America?????

Actually, there is a trick in doing that.

You are all set.

See the example below:

That was a question asked on Microsoft Technet Forum.

Hope it helps others too.

Initially we thought there is an accident but it was as usual because of CONSTRUCTION. Many of us tried all our direction senses and of-course we managed to save around one hour. Hold on……let me tell you how much time did it really take to reach Kensington park…..guess what… it took around two and a half hour for most of us.

So, instead of 2pm we managed to get there by 3.30-4.00pm.
Then it was time to finalize the spot. As per our commitment we decided to grab Picnic spot A only. And we were quite successful in picking a portion of it for ourselves. Now, some arrangement is always necessary to make the place appropriate for our convenience, like bench movement etc etc…..and definitely near a place where the trees

are nearby to tie our Volleball net. You can see that our team is really working hard and ‘someone is getting the work done and making sure nothing goes wrong’.
Finally, everything got settled and now it was time to play Volleyball, and why not….snacks were always there to munch in between. Budwizer for those who like its sour taste and Coke

for those who don’t or even for those who are a bit double-entendre and like to have both. For those who like none of these things there was Fruit juice and our Nature Fresh water obviously.

Pizza Guys : This time our pizza guys were Adesh & Chethan, courtesy PIZZA HUT. FYI, we ordered equal quantities of veggie and non-veg pizzas along with Garlic Breads so that everyone gets his choice. But unfortunately, lots of people missed the party and hence we had an abundance of Pizzas.
Finally after finishing at most one large pizza of each kind and some of garlic breads we all were ready to play Volleyball.

We quickly selected two teams. Team A : Vivek, Amit, Gurminder, Kiran, Raghavender and myself. Team B : Balaji, Anil, Chethan, Prashant, and Vishal & Adesh. We played three games to decide which team is the best. Finally we found out Team A was quite strong

and needless to say beer played a vital role in making this team strong. We were playing like….one point, one gulp of beer, another point another gulp of beer, one game then some slices of pizza or garlic bread. Everyone tried to incorporate all kinds of strategies to win the game. Team B was quite good in mis-counting the points. Here we really missed the key members of our team SALWE and SAMEER to keep statistics and for better score keeping.

They were supposed to be there but due to some unavoidable circumstances they couldn’t make it to the event. Overall everybody enjoyed the game. And unanimously Team A was declared CHAMPION. (View picture of the game and then the entire team.)
After that we decided to go for some boating but everyone was so tired that we finally decided to go back. In between some people quickly managed to grab some beatiful scenes around near the beach.

Finally, we took some quick group pictures and headed together home.

I would like to thank Amit, Adesh and Chethan for their great help in organizing this event. And I appreciate all who could make to the event. Other photos are also there.

If any of you guys want to have the original photos, then contact me or Amit.

One more thing, since there were very few cars at the event, we decided to return the park entry fee to everyone. It was really fun to be a part of this event.

Hey Guys…. visit our picnic photos? I am sure you’re gonna like it….